Metallothioneins (MTs) are a superfamily of ubiquitous metalloproteins, mostly of low molecular weight, which exhibit an extraordinary Cys content (about 30% of the total amino acids). This high content of cysteine residues allows metallothioneins to bind high amounts of heavy-metal ions through the corresponding metal-thiolate bonds. MTs constitute polymorphic systems in almost all organisms, so that diversification of MT isoforms may underlie their ability to play versatile biological roles. In organisms, MTs have been found coordinated to different metal ions, such as Zn(II), Cd(II) or Cu(I) and they have been associated with essential metal ion homeostasis, defense in front of toxic metal ions, scavenging of free radicals and ROS, and a wide range of cell stresses. It is believed that MTs have evolved owing to the different requirements of organisms creating an extraordinary diversity and rendering interest in the study of each MT and their structure/function relationships.

In our group, MTs constitute the first research line in the Bioinorganic field. Our fruitful collaboration with Dr. Sílvia Atrian at the Universitat de Barcelona since the beginning of the 90’s has allowed us reaching a certain number of interesting findings in the field of MT’s knowledge:

Other important collaborations in this field are those with the research groups headed by Dr. Reinhard Dallinger (Innsbruck), Dr. Claudia Blindauer (Warwick) or Dr. Dennis Thiele (Durham, USA). 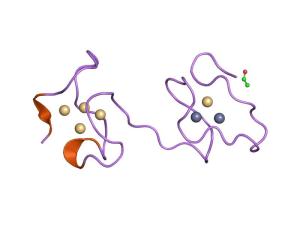